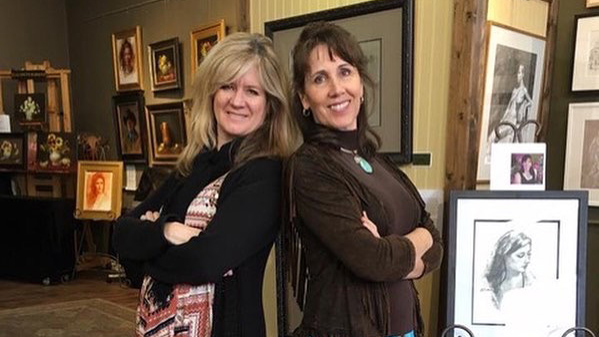 An idea that began on a walk with three dogs and two friends that “played pretend” on what a perfect studio/gallery/workshop space would look like. Ideas and wants were written on a napkin during a lunch at their favorite sushi restaurant. North Light windows, tall ceilings, a space large enough for workshops, and flowers out front. A place where they could be inspired to create beautiful things. The numbers 11 kept creeping into their day. Looking at their watch it was 11:11. 11 emails unread, 11 Facebook notifications, 11 reminders. Neither one thought much of it until one friend told the other how odd it was that she kept seeing the number 11. “Me Too!!!!!!” said the other friend. Later they both realized that the number 11 was a sign from the universe that they were doing exactly what they were suppose to be doing. They were on the right track. Two weeks later, a lease was signed with an address of “101”. Bella Muse Gallery was born. Their vision continued to expand once they opened Bella Muse Gallery and from there Bella Muse Productions was created to bring you workshops and instructional painting videos.

Bella Muse Productions is committed to bringing quality instructional videos that help you become a better artist. We feel strongly about how important art is in our lives and we want to continue to make the world a beautiful place one painting at a time. One video at a time.

Our Commitment to You

To continue to inspire and help artist learn, paint and grow one video at a time

Our vision is to make the world a more beautiful place one painting at a time.  To educate and inspire artists along their journey.

We try hard to make it convenient to both order or download our videos.  If you have any problems, please let us know.  We are here to help.

Bella Muse Productions is a video production company that is run by artists for artists.  As teachers in the art world for over 30 years, we know what artists want. We understand the questions that aspiring artists want the answers to and we are committed to bringing those answers to you.